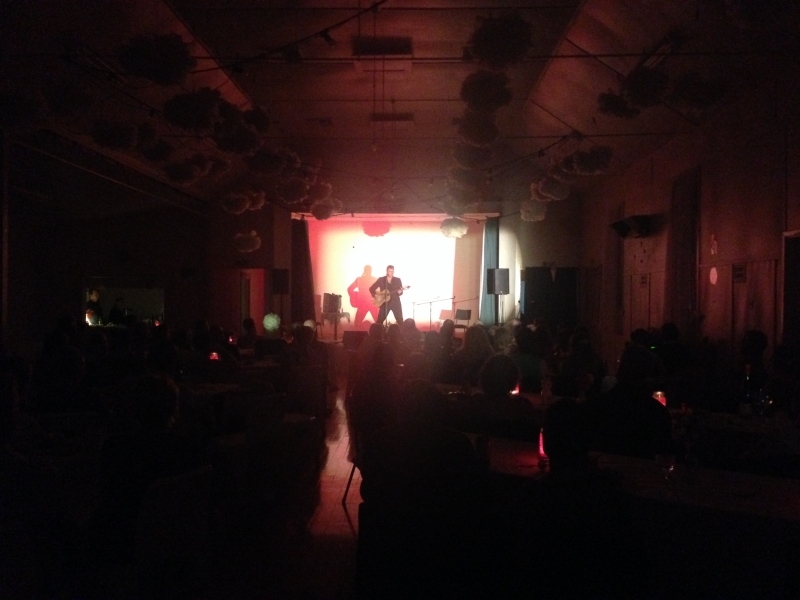 ◄ Back
Next ►
Picture 94 of 95
By Anita McPherson, first published in the Wangaratta Chronicle on October 12, 2016
Photos: Anita Laurence

Local Kids had the opportunity to take part in a unique and eccentric theatre experience last week when the “Loose Ends” children’s theatre production visited Moyhu.

The Regional Arts Victoria touring show was brought to the students at the King Valley cluster schools as a gift from the King Valley Art Show committee, whose aim is to enrich the local community’s arts culture.

The event began with a workshop for grade six students in the Moyhu Primary School hall on Monday, hosted by Loose Ends star and creator, Jens Altheimer.

It was followed by a live show for the 170 combined cluster school students from prep to grade six along with teachers, parents and friends at the Moyhu Soldiers Memorial Hall on Tuesday.

Myrrhee school teacher Robyn Kilgour said around 18 students took part in the workshop which involved everyone working together to build a convoluted contraption. She said it was a hands-on experience which was thoroughly enjoyed by everyone involved, with Jens proving to be a thoroughly engaging tutor.

“We try to bring the senior students from each of the rural schools together as often as we can so they can get to know each other better,” she said. “These events are fantastic for them, as they prepare to transition to high school”.

It took Jens and his assistant five hours to set up everything they needed for the show which involved some spectacular lighting and special effects.

It certainly appeared to captivate audience members, including Jordan Howard Gaffeney. “I thought it was interesting and gave me ideas for what I can do in my life,” he said. “I learnt how to make my own teddy friend – it made me feel alive and free.”

Jack Kelly said he thought the theatre show was “innovative and inspiring”.

“It made me feel frustrated because the guy couldn’t just go outside and I wanted him to be able to do it”.

Visit us in 2021 on Queen’s Birthday Weekend

Weekend Fit for a King